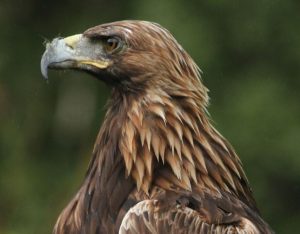 She is a huge bird of prey, with her long broad wings and longish tail, she has a different outline to the smaller buzzard.

Heidi likes to soar and glide on air currents, holding her wings in a shallow ‘V’.

Eagles have traditional territories and nesting places which may be used by generations. 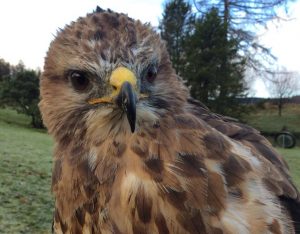 Now the commonest and most widespread UK bird of prey.

The buzzard is quite large with broad, rounded wings, and a short neck and tail. When gliding and soaring it will often hold its wings in a shallow ‘V’ and the tail is fanned.

Birds are variable in colour from all dark brown to much paler variations like Buzz, all have dark wingtips and a finely barred tail. Their plaintive mewing call could be mistaken for a cat. 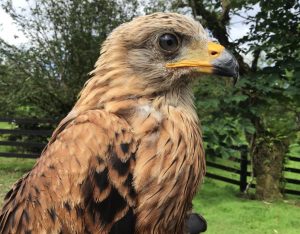 The Red Kite is a large Bird of Prey with angled wings that are tipped with black.

A large, graceful bird of prey, it soars over woodland areas.

Its distinctive shape and “mewing” calls make it easily to identify. 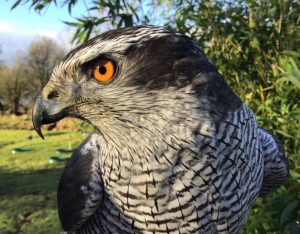 The goshawk is a large hawk, almost reaching buzzard size, with Long tail and broad rounded wings a woodland hunter, When up close up it has a distinctive white eyebrow flash. Its broad wings enable it to hunt at high speed, weaving in and out of trees, and its long legs and talons can catch its prey in flight as well as on the ground.

The female is substantially larger than the male as in all Birds of Prey. 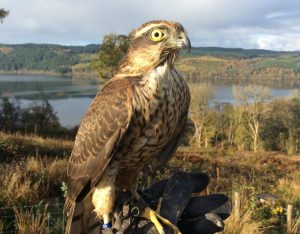 Sparrowhawks are small birds of prey. They’re adapted for hunting birds in confined spaces like dense woodland, so gardens are ideal hunting grounds for them. 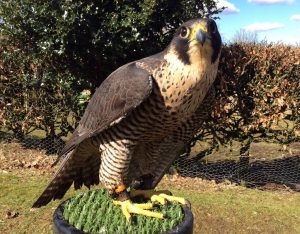 At Kintail Birds of Prey Argyll we have a team of peregrines, large and powerful falcons.

They have pointed wings and a relatively short tail. It is blue-grey above, with a blackish top of the head and an obvious black ‘moustache’ that contrasts with its white face. Its breast is finely barred. It is swift and agile in flight, chasing prey. 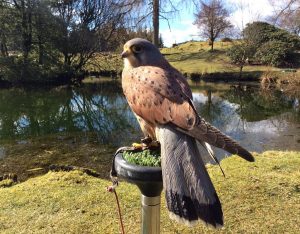 Kestrels are a familiar sight with their pointed wings and long tail, hovering beside a roadside verge. Numbers of kestrels declined in the 1970s, probably as a result of changes in farming and so it is included on the Amber List.

They have adapted readily to man-made environments and can survive right in the centre of towns as well as the countryside. 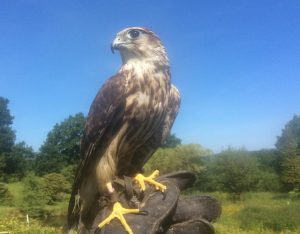 The UK’s smallest bird of prey, this compact, dashing falcon has a relatively long, square-cut tail and rather broad-based pointed wings, shorter than those of other falcons.

Its wingbeat tends to be rapid with occasional glides, wings held close to the body. 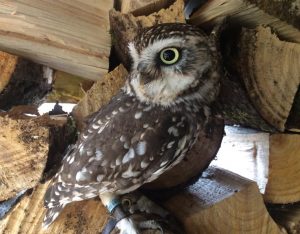 This small owl was introduced to the UK in the 19th century. It can be seen in the daylight, usually perching on a tree branch, telegraph pole or rock.

It will bob its head up and down when alarmed. In flight it has long, rounded wings, rapid wingbeats and flies with a slight undulation. 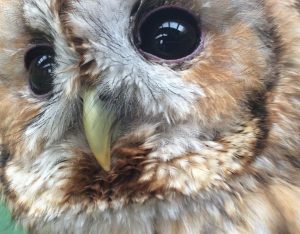 The Tawny Owl has a rounded body and head, with a ring of dark feathers around its face surrounding the dark eyes. Tawny owls in the UK are mainly reddish brown above and paler underneath.

It is a widespread breeding species in England, Wales and Scotland but not found in Ireland. Birds are mainly residents with established pairs probably never leaving their territories. Young birds disperse from breeding grounds in autumn.

The long-eared owl is a medium-sized owl. It often looks long and thin, with head feathers (known as ear tufts, even though they are not ears) which it raises when alarmed.

It is buff-brown with darker brown streaks and deep orange eyes.It breeds thinly across the Scotland & UK. Northern birds migrate southwards, including birds from Europe coming to spend the winter in the UK in general. 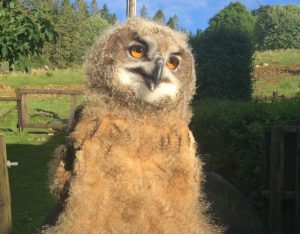 These large owls predominantly feed on small mammals such as voles, hares, rabbits and mice; large mammals include foxes. 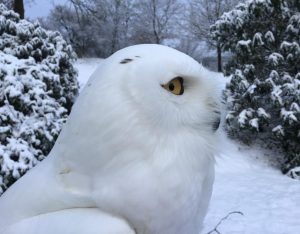 The Snowy Owl usually nests in Scotland on Orkney or Shetland, from the Tundra area, a large owl with the male being predominantly White and the female being heavily barred. 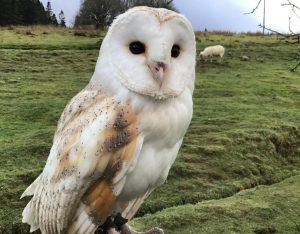 With heart-shaped face, buff back and wings and pure white underparts, the barn owl is a distinctive and much-loved countryside bird.

Widely distributed across the UK, and indeed the world.

Open All Year – Rain or Shine